Cycle Your Worries Away

World Bicycle Day was celebrated earlier this month on June 3 to “recognize the versatility and uniqueness of the bicycle, as well as its reliability and sustainability as a mode of transportation.” On April 12, 2018, the resolution declaring June 3 as World Bicycle Day was unanimously adopted by all 193 member states of the UN General Assembly.

Why celebrate cycling? Cycling is a healthy, low-impact exercise that can be enjoyed by people of all ages, from young children to older adults. Cycling improves strength, balance, and coordination. It may also help to prevent falls and fractures. Riding a bike is an ideal form of exercise if you have osteoarthritis, because it is a low-impact exercise that places little stress on joints, including your knees, hips, and feet. It is also fun, cheap, and good for the environment.

SOS surgeon, Dr. Daniel Wnorowski, is an avid cyclist who often bikes to and from work and shares his passion for cycling. “I just enjoy riding a bike and being outside. Fitness, health, peace of mind, doing my part to address climate change, the challenge of harsh weather and the simple adventure of it, especially in the winter.”

He began riding to school in junior high and continued through high school, medical school, and various jobs. He’s often seen arriving and departing the SOS offices throughout the year. “I was trying to ride to work at least once a week and did this without fail for over two years until this past winter when I had several very close calls and almost hit by cars. I lost my mojo for a bit, but now I’m back at it.” 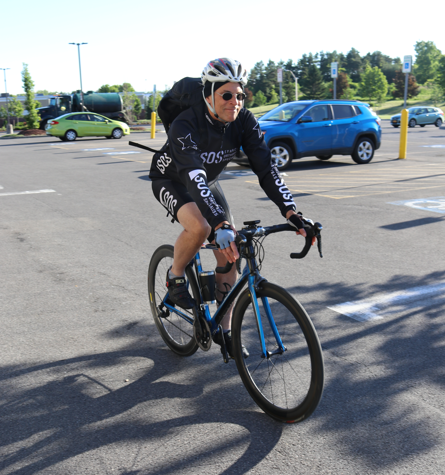 He enjoys hill climb races, triathlons, bike races, endurance rides, and Dante’s ride. “I would like to bike across the country, and I look forward to returning to Ironman competition, but my wife said I can only have one fulltime job.”

Dr. Wnorowski encourages everyone to try cycling, saying, “Just do it. There’s plenty to learn and nothing wrong with learning! The benefits include cardiac fitness, balance training, and weight loss. Even people with back problems can enjoying biking on a recumbent bike.” Those anxious about biking outside can try a spin class, a stationary bike, or Peloton.

Another option available today is an e-bike. Electric bikes are growing in popularity and are a good way to get out and get fit with less exertion. E-bikes use rechargeable batteries that can travel up to 25 to 45 km/h, much faster than most people would cycle. They have battery-powered “pedal assist” which can reduce stress and impact on knees and thighs. Dr. Wnorowski says these are a “great way to start if one is overweight or deconditioned.” If anyone is interested in trying an e-bike locally, they should look into Sync Bike Share in Syracuse. This offers users bikes to rent and use as needed without an investment in a new bike.

Helpful Tips for Cyclists
• If you’re riding outdoors, always wear a bike helmet, along with eye protection (like simple sunglasses) and brightly colored clothing. Also consider bike gloves to protect your hands from vibration, or from injury if you fall.
• Map your route before heading out. Dedicated bike trails help keep you separated from traffic.
• Begin with five or 10 minutes at a low resistance. Go easy at first, then gradually increase the length and intensity of your ride as you progress. To determine if you are in the moderate intensity exercise zone, you should be able to carry on a conversation while exercising, though your breathing rate will be increased.
• Stop if anything hurts. Listen to the pain. Take a break when your joints start to ache or change gears to lessen the resistance. Walk your bike up a hill if needed.

Cycling By the Numbers